The resource efficiency measure will continue next year

Estonian third Resindustry project’s local stakeholder group meeting in webinar format on topic Increasing the Competitiveness of Industrial Enterprises through Improving Resource Efficiency and Increased Use of Renewable Energy (in Estonian “Tööstusettevõtete konkurentsivõime tõstmine ressursitõhususe parendamise ja taastuvenergia suurema kasutamise abil” took place on 15th of June and 27 participants discussed the previous period’s measure and presented plans for the new period. Feedback on the previous period’s measure was provided by experienced energy auditors and by representative of different association of industrial enterprises, all of whom made recommendations and suggestions for improving the measure. The use of renewable energy sources in the framework of the resource efficiency measure was also presented, which was the production of biogas from the wastewater and the use of waste heat of the beverage producer A. Le Coq, installation of solar panels combined with replacement of existing forklifts with electric forklifts by the fishing industry company AS JAPS.

It was pointed out that the continuity and conditions of the measure could be consistent and the conditions less variable, as companies make longer plans and in this case it would be possible to better plan their activities. Resource audits were highly praised and highlighted as very good tools, where an external expert brings additional information and new ideas to improve the company’s environment impact and resource productivity. They are particularly useful for small and medium-sized enterprises, where in-house knowledge is generally lower and investment resources are smaller. Suggestions were also made, for example, in the evaluation of project applications, additional points could be obtained for the implementation of renewable energy sources or for increasing the share of renewable energy. The proposal to promote renewable energy in industries was also made by that each energy and resource auditor should assess the potential of renewable energy and waste heat in each audit. The latter is not required today, but providing this overview could also lead companies to invest in cost-effective renewable energy projects, which would reduce companies’ carbon emissions and help meet national climate targets.

The representative of the Ministry of the Environment pointed out that so far 53 resource efficiency specialists have been trained under the measure and 132 resource audits in the total amount of 0.69 million euros have been supported. The support decision for investment grant has been made for 173 projects with the total grant amount of 67.8 million euros – the investment volume of the projects together with the companies’ own contribution is 198 million euros. So far, 74 projects have been completed. Discussions with the European Commission on the new financial period of the European Union are still ongoing today and it is not possible to talk about more precise amounts of grants, but the resource efficiency measure in a similar form will continue in 2022.

The webinar was supported by the Resindustry project funded by the Interreg Europe program. Information on the RESINDUSTRY project, news, events and various practices to reduce the environmental footprint used in industry can be found at the following link: www.interregeurope.eu/resindustry. 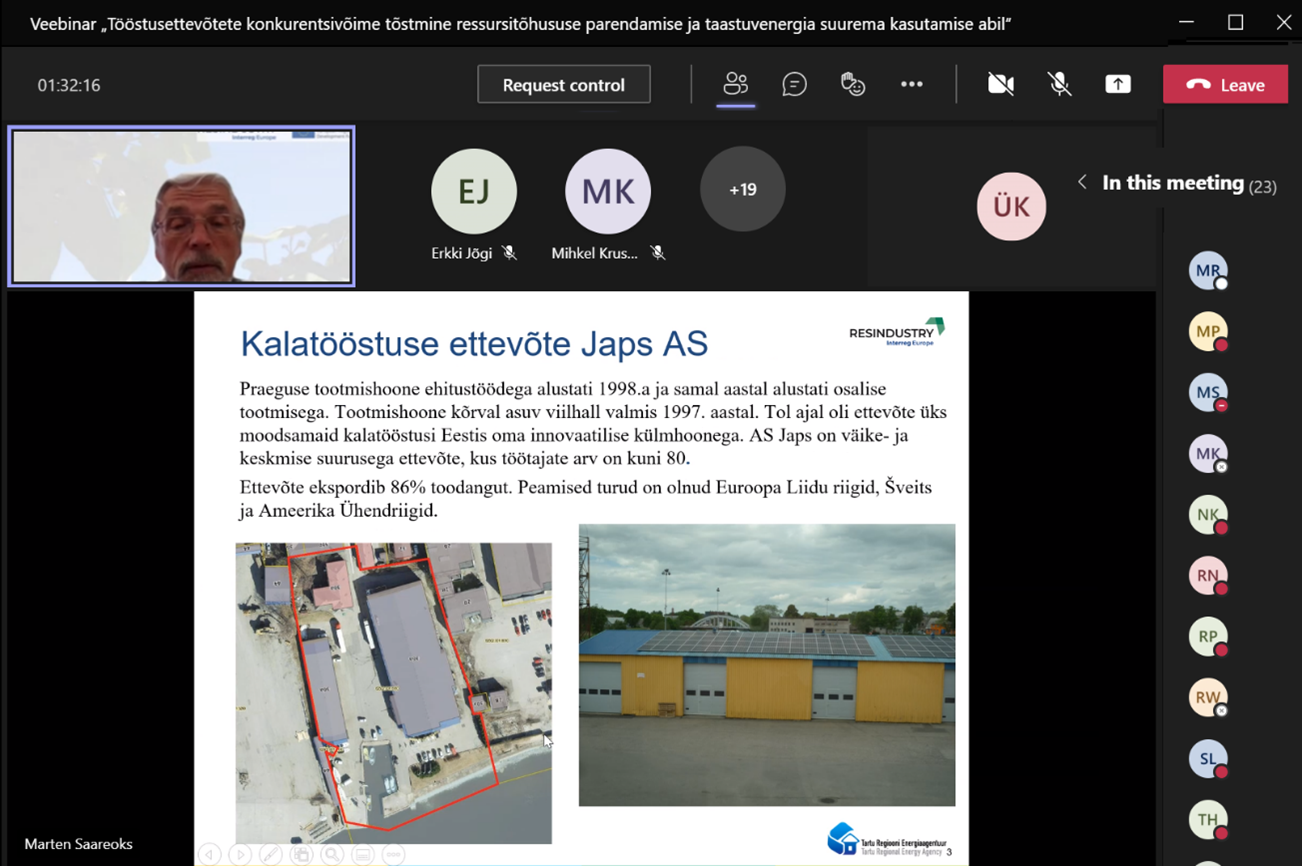 Webinar Increasing the Competitiveness of Industrial Enterprises through Improving Resource Efficiency and Increased Use of Renewable Energy took place on 15th of June in Microsoft Teams.